Donald Trump’s election as President of the United States 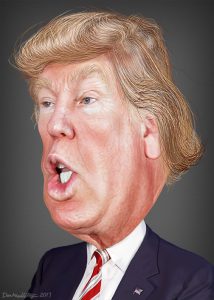 Donald Trump’s election as President of the United States concerns many people because he is not only an inexperienced politician but also a controversial one. He seems to think he is above the law and can run the country like a despot in a tinpot dictatorship.

Fortunately the first signs of the judiciary constraining his executive powers occurred last Friday when federal judge James Robart stopped the order that temporarily blocked all refugees and citizens from 7 Muslim countries from entering the US.

The Judges have rejected Donald Trump’s appeal to have his ban immediately reinstated.  The 9th US Circuit Court of Appeals yesterday denied a formal request by the US Department of Justice to lift the ruling.

Fortunately the US Constitution designates its judiciary as a check on the power of the government and Congress.

The very fact that Muslims from the 7 banned countries haven’t committed a terrorist attack on US soil since 9/11 justifies James Robart’s contention that such executive orders should be based on fact not fiction.

Considering the fact that 301,797 US citizens were shot dead on American soil between 2005-2015 Donald Trump clearly is focusing on the wrong threats to American lives.  During that period Jihadists were responsible for killing 94 people in the US.  It is concerning to note that 49% of Americans support the ban because they are more afraid of terrorism than guns despite the fact that they are 3210 times more likely to be killed from guns than terrorism.  Bizarre, eh?

If the judiciary succeed in constraining Trump on this immigration issue the whole world is likely to breathe a sigh of relief.

Of immediate concern is Trump’s threats to introduce tariffs on imported goods to the US.  This is in spite of the fact that it would reverse a very long trend of globalisation which has led to 85%-90% of world trade being tariff free.  The worry is that  if he has his way it is likely to at least lead to a world recession if not a world depression.  The last time a law was brought in to impose trade tariffs in the US was in 1929 in the form of the Smoot-Hawley Tariff Act which was the precursor to the Great Depression.  Clearly Donald Trump is not a student of history.  Let’s hope the judiciary can constrain him in this respect too otherwise instead of making America great again he will make America poor again.